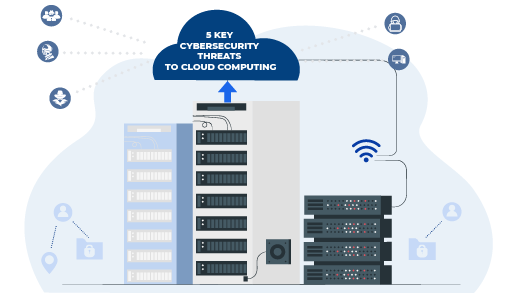 Cloud computing allows users to quickly spin up workloads without dealing with the burden of maintaining physical infrastructure, resulting in higher overhead costs. With an increasing number of businesses embracing the cloud in some form or another, it comes with its own set of security risks.

According to Gartner, global research and consultancy firm, public cloud end-user spending might climb by as much as 18 percent by 2021. Cloud computing brings with it a slew of new security concerns and roadblocks. Data is kept at a third-party source and accessed using the internet through the cloud. So get your free cloud computing course with a certificate now to get in the career demand.

Cloud security and risk are viewed as a shared responsibility by cloud service providers. In this model, the cloud service provider is in charge of its security while the customer secures the data they store there. Every cloud computing user is responsible for ensuring their data from security risks and limiting access to it, whether it is software-as-a-service (SaaS) like Microsoft Office 365 or infrastructure-as-a-service (IaaS) like Amazon Web Services (AWS).

Cloud data security is the heart of cloud computing security problems. The majority of difficulties in the cloud arise from the data clients save there, whether it is a lack of data visibility, an inability to manage data, or data theft. Read on to examine the top cloud security issues across SaaS, IaaS, and private cloud, ranked by the frequency with the enterprises worldwide encounter them.

Given its expanding popularity, what are the security dangers connected with cloud computing? So here is the list of top cyber risks that are listed below.

1.Misconfiguration of the cloud

Consistent monitoring for cloud misconfigurations becomes critical because most cloud breaches are caused by misconfiguration. That is what the Cloud Security Posture Management (CSPM) software allows you to achieve. As a result, according to Reportlinker.com, the global CSPM market is expected to rise from USD4 million in 2020 to USD9 million by 2026. CSPM is now a required technology for cloud-based enterprises, according to the Gartner security summit in 2021.

Cloud settings are particularly vulnerable to Denial of Service (DoS) and Distributed Denial of Service (DDoS) attacks because they require Internet connectivity to access them. Attackers can inundate a company’s cloud network with massive online traffic, leaving resources unavailable to consumers and employees.  A DoS attack will be more devastating the more significant the portion of infrastructure in the cloud. You can learn about it during a cloud computing bootcamp.

To reduce the danger of DoS attacks, take the following steps:

Having proper training and awareness can prevent insider assaults. When designing your environment’s access controls, follow the concept of least privilege to limit employees might cause and build a suitable personnel off boarding strategy. Most crucially, cloud security is a people problem as it is a technical one. Taking care of your employees lowers the chances of renegade employees generating issues for your company.

Because you’re using a third-party service for computing, you’re giving up some control to the cloud service provider (CSP). Because your organization does not own the physical infrastructure in this situation, getting a complete insight into your infrastructure and resource usage is more complex, especially if you lack the necessary technical competence.

The cloud is run on a shared responsibility model, which means you and the cloud service provider share the responsibilities. While the CSP manages the physical infrastructure, you are still responsible for ensuring the security of your data and application workloads in the cloud. This lack of visibility is a prevalent symptom in many complex cloud settings, rendering it vulnerable to data breaches and threats such as the next on this list, unauthorized cloud workload use.

5.Unauthorized Workloads on the Cloud

The majority of significant CSPs use a self-service paradigm. It allows users to provide and de-provision workloads according to their requirements quickly.

On the other hand, this ease of usage leads to Shadow IT, or IT resources created and used without the IT staff knowledge. Shadow IT carries its own set of dangers, which include (but are not limited to)

Ensure to follow the concept of least privilege and only allow users to create workloads as part of their employment. Set up audit logging and alerting tools so you can keep track of all internal activity and quickly identify any unlawful ones.

None of these dangers are novel, but the shifting landscape and move to the cloud necessitate a different approach than traditional on premise workloads. Being proactive not only boosts your organization’s reputation and allows you to focus on the tasks that add value to your business, but it also helps you avoid more extensive, more costly challenges.